Capital City Civitan works to support the mission of Civitan International by focusing on projects that help individuals with disabilities in our community, region, state and country, which includes Special Olympics in Wake County and North Carolina. 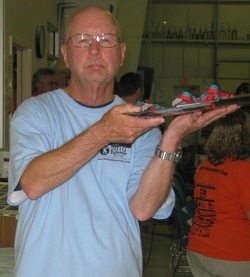 Paul with the awards for the Special Olympics gymnastics events
Capital City Civitan members volunteer with Special Olympics in the Triangle.  For the Summer Olympics, we have helped with awards at the gymnastics competition held in Raleigh.  Starting in 2013, we switched to helping out with the volleyball competition in conjunction with other Civitan clubs in the area, and we also have one member who served as a swimming official.